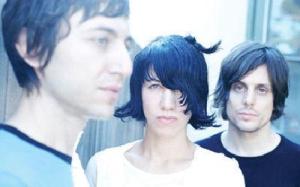 Most people will agree that one of the worst things about outdoor festivals is that they are inevitably hotter than if you held a concert inside an old fashioned kiln. I’d have to say that the worst thing is that the sound generally sucks. As it was, the 100+ degree weather turned out in my favor as it sent a large portion of the crowd seeking sweet shady refuge from the sun’s rays and let me get closer than I’d hoped to the speakers; which were pushing out a pretty fine mix. After I made myself a newspaper visor I was good to go.

Like my improvised headgear, Autolux represents a synthesis of technology and ingenuity that results in some pretty nifty things; albeit on a much larger, and way cooler, scale. I like to think of Autolux as two opposing forces that have collided and been fused together seamlessly. They are a band of contradictions that have somehow been resolved. The most obvious example of this quality would be the way that they fit their noise together with their pop sensibilities. At this point, I have to conclude that Autolux can produce any sound they want from their instruments: from back-arching wails, to gentle warbles, to ominous grinds that imply an epic scale. Pyramids big. All of the tools at their disposal would mean nothing though without their imaginative organization.

Every element within the songs I heard Saturday afternoon was immediately dependent on every other element at work. Whether it was a noise intro that slowly morphed into a pulse-turned-melody or a sudden blizzard of feedback that cut through a placid veneer, every part was included with an understanding of the whole. Where Autolux really shined though was not just in creating a dry juxtaposition of noise and pop by filling their songs with genre specific islands, but by creating enough subtle shifts and overlaps that I couldn’t tell which was which. The emphasis within the songs flowed seamlessly back and forth between the percussion and the strings so that at any point a different member could be driving a song or creating a rhythm for the audience to hold on to while the rest of the band added flourishes on top of it.

Autolux songs sound as though they were written by adventurers that never make any mistakes. Perhaps that’s why I’ve been waiting so long for their next album, Transit Transit. I imagine one would have to travel very slowly if he or she were to adventure without error. Their painstaking attention to detail (this is the same band that built their own lights after all) makes for some great shows, but it’s also the reason I had to wait for them to stop by to hear any new material. My anticipation level for the next album has spiked. The new songs maintained material’s the organizational soul while magnifying the elements. The abstract elements seem to have gotten quite a shot in the arm with more frequent noise freakouts that manage to capture and even greater sense of urgency. I was particularly struck by Carla Azar’s drumming, which has evolved quite a bit as well. I felt uncoordinated just looking at her. With the exception of “Audience No. 2” the percussion served less of a conventional rhythmic capacity and Azar got a chance to really brake out of her grooves and add some impressive barrages of sound that showcased her ability for complex parts.

This is a little blurb i wrote to illustrate the same type of conciliatory style in their live performance that I didn’t know how to work in but still like enough that I want to do something with. I think the names could catch on, especially with the popularity of guitar hero and rock band turning everyone into a rockstar. They’re going to need a common terminology.

There are two distinct types of feedback production. On the one hand there is the “Flail of Abandon,” in which the artist knows that there should be some type of feedback coming in the general area of the song and is satisfied if his careening produces some sort of noise during that time. Then, there is the “Tweaker” (cousin of the “Knob Twiddler”) who stands calmly in front of his amp making minute modifications so as to exact feedback that is just right. Bassist Eugene Goreshter synthesized these methods and used a kind of controlled swing.